A (half) marathon lunch at Del'Aziz in Bermondsey 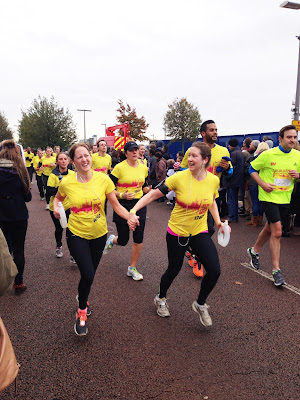 My flatmates are pretty keen on running, they've done quite a few 10ks but last weekend K stepped it up a notch with Nike's Run to the Beat half marathon on Sunday.

We went along to cheer her over the finish line and after watching probably a thousand identically dressed people pass us she eventually appeared and managed to high-five us all as she went past.

There were different levels of people taking part, some looked like they were hardly trying, some were limping and some were as red as beetroots, but it didn't seem to matter, each person was there to reach a different goal.

My favourite was a girl pulling her friend along by the hand and shouting "come on Becky, there's the finish line I can see it!"

Afterwards, we met up for lunch at Del'Aziz in Bermondsey Square. It's a great deli which does a good selection of food with a mediterranean twist such as burgers and breakfasts.

We all went for pittas, lamb, sausage and chicken which came with salad and yoghurt. We also ordered the Del'Aziz special fries which meant they were basically covered in garlic. Yum.

I ordered a large cappuccino to warm up after standing in the cold for so long but I didn't think it'd be as big as it was, it rivalled the Costa Coffee soup bowl mugs. It was huge.

K was fully intending on eating whatever she wanted on Sunday picked up a slice of plum tart from the selection of cakes at the front of the deli which looked absolutely amazing. 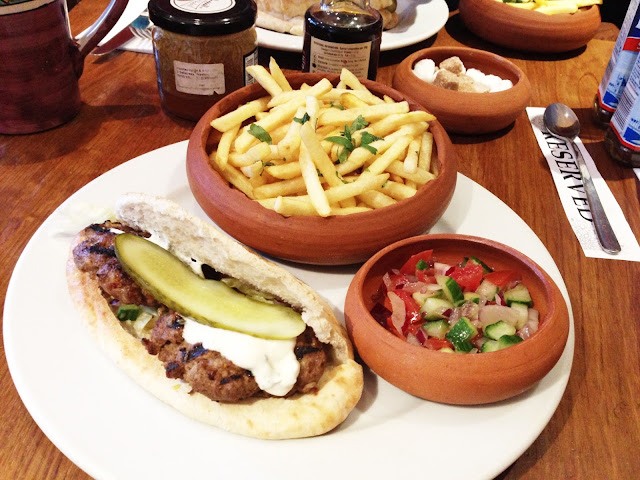