Less is definitely more when it comes to glitter and colour 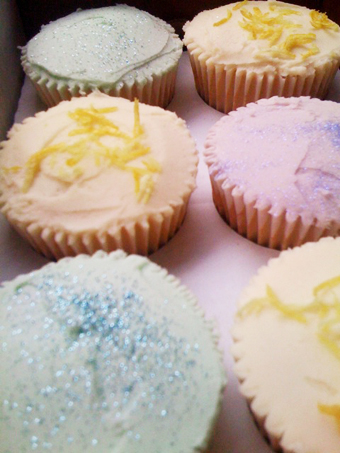 In the same batch of cupcakes as the aforementioned most beautiful cupcakes to ever come out of the oven was a house warming gift for N and D for when they moved into their Shepherds Bush flat.

Made from the same Hummingbird Bakery Vanilla and lemon zest recipes and the same batch of buttercream, these were a colourful, glittery version of the get well soon cupcakes.

I used colour paste in lilac and kelly green to colour the buttercream just slightly and topped them with a dusting of glitter which I had bought at the Cake International exhibition in Birmingham. The lemon zest cupcakes are the same recipe I adapted previously with no additional decorations.

It is important to use strong colours and glitter sparingly as I have found that nobody likes eating them and they are always the last to leave the plate. When colour, glitter or other decorations, remember, less is definitely more.
Posted by Unknown at 8:10 AM