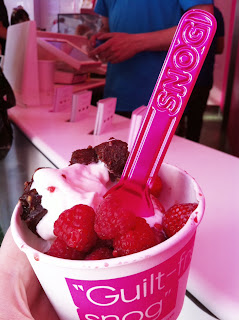 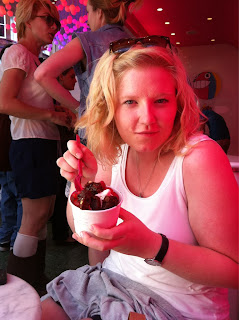 I was trying to do this in 'real-time' but sometimes work and other things just take over so the next few posts may not be in any sort of chronological order. But what does it matter...

I thought I'd start with one of summery-est cake moments. As you can see it is a pot of frozen yoghurt, with brownie (yes that's the cake bit) and raspberries. I met D on Brewer Street for a quick catch up the day after I got back from Jersey. The weather was still amazingly hot so we needed a cool down and frozen yoghurt seemed the right way to go; you would not think it possible to be both delicious and healthy at the same time (if you take away the brownie), but SNOG can perform miracles.

SNOG is one of my favourite places to go, it's all electric pink and white. It's not just them doing frozen yoghurt though, when at work, we'll take a walk into Angel and drop by FRAE on Camden Passage, which is basically the same idea, less fluorescent maybe and more of the 'natural' vibe. They do strawberry flavour yoghurt, which is a must; almost as good as a pot of Häagen-Dazs.