Velvet sofas and the Disney 50 at the BFI Southbank 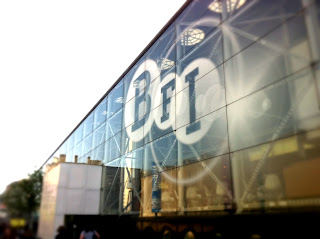 On Sunday afternoon we went to see Cinderella (1950) at the BFI Southbank as part of their Disney 50 season. It was a beautiful day and after watching the marathon runners go across Tower Bridge in the morning it was nice to get out of the crowds, so we hired BorisBikes and cycled down the south bank. 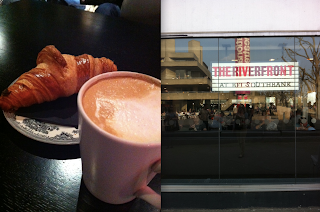 We met in the BFI coffee bar, a gloss black enclave with walls made of long black fringing and the squishiest velvet sofas, which were a little misplaced and didn't really allow for all four of us to sit within talking distance of each other due to their large armrests and varying shapes and sizes. It's better equipped for working by yourself (they have free wifi) or for a quiet coffee to get away from the hustle and bustle of the bank. 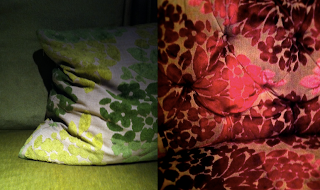 I ordered a latte which came in a tall white mug and rough cut sugar cubes in a kilner flask - I don't take sugar but it was nice to know that the cubes wouldn't be left out in the open air. N had a croissant & sparkling water, K had a diet coke and we shared some chunky wedges which came really quickly as they new we didn't have long before the start of the film.
Posted by Unknown at 8:50 AM

Labels: BFI Southbank, cold drinks, in a mug, lattes, on a sofa, pastries, SE1, with wifi