I drink Champagne too. 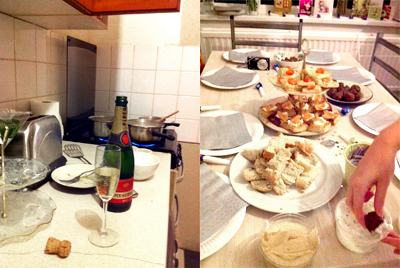 At New Year we decided we didn't want to go out - spending half the night travelling and being cold - so K, N and I had some friends over for dinner and games. After we had prepped the smoke salmon & cream cheese canapés and mini toad-in-the-holes earlier in the day we set them to one side ready to put in the oven when guests arrived. I was charged with cooking the main course, a cream sauce recipe from Gino D'Acampo's book Gino's Pasta: everything you need to cook the Italian way, which N and I had decided to adapt by letting some spinach wilt into it just before serving. 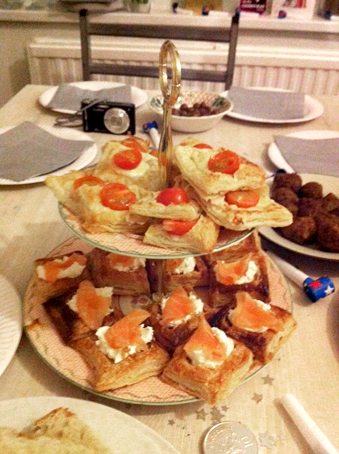 It's always a bit of a juggle cooking and being part of the party, but as this was quite a quick meal - lots of pasta, salad and a heap of garlic rubbed ciabatta - it allowed me to feel free to leave it simmering away for short bursts of time. And for the moments I had to be at the stove, stirring the sauce at crucial moments, I had a glass of Piper Heidsieck to keep me in the party mood!

Everything turned out brilliantly and we had such a laugh playing games like charades and musical chairs which got more hilarious as the night went on (as you could probably guess). At midnight, we did our countdown to Big Ben on the television and then watched the fireworks on the screen and through our windows simultaneously. We finished the night with a walk around Tower Bridge and Potter's Fields, taking in the atmosphere and thinking what a great New Year. We will definitely be doing this again next year.
Posted by Unknown at 8:33 AM