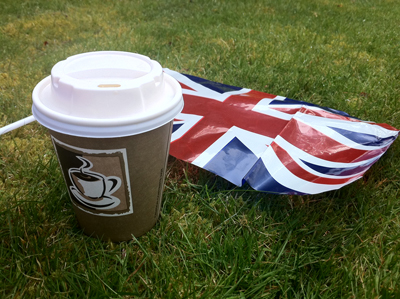 I was beginning to worry that the Royal Wedding Day would come and we would be stuck in a Scottish village that wouldn't give two hoots about it. So when I received an email from N whilst in Bridgend that we could watch the wedding in the grounds of Balmoral Castle I was over the moon.

Friday morning came and we drove the winding heather flanked roads from Nairn over to the Balmoral Estate, which we expected to be absolutely rammed. When we arrived at nine thirty we were nicely surprised that it wasn't as busy and had the atmosphere of a village fête complete with Rule Britannia being played and Union flags being handed out whilst we paid our entrance. 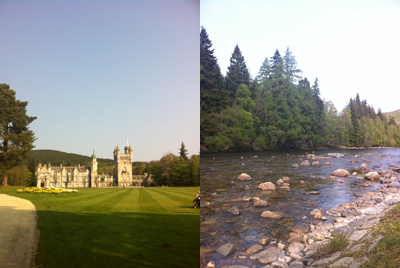 We settled in front of some of the large screens which had been placed on the front lawn to watch the wedding and I got a coffee from one of the little stands, the other stand had a hog roast cooking ready for the lunch time rush. My coffee came in a stupidly small paper cup - I had asked for a large but this was all they had apparently - but was otherwise quite drinkable.

After the excitement of THE dress, the trees down the centre of Westminster Abbey and THE kiss, we calmed ourselves down and went for a look around the house. Well it turns out you can only go into the ballroom as the rest of the house is shut up until the Queen goes up in the summer. We did get to see some of her very sparkly ball gowns though, although they had nothing on THE dress.
Posted by Unknown at 2:57 PM

Labels: AB35, Balmoral, in a paper cup, Scotland, Weddings, with a view