Have you ever seen something so perfect come out of the oven? 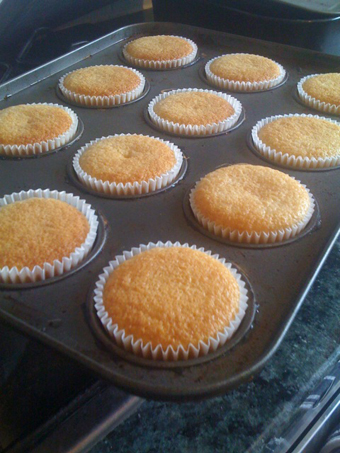 There are times when you simply cannot believe the beauty of the cupcakes which come out of the oven.

This was one such time. I was making cake for K, she'd been confined to her sofa at doctors orders after an operation. So one Saturday afternoon our friends descended on her to keep her occupied.  I couldn't make the gathering but sent cake instead.

I made daisy topped vanilla and lemon zest cupcakes made by adapting the basic Hummingbird Bakery vanilla cupcake recipe.


Ingredients:
120g plain flour
140g caster sugar
1 ½ tsp baking powder
a pinch of salt
40g unsalted butter, at room temperature
120ml Milk (the original recipe says whole milk, but I only ever have skimmed, so I use that)
1 egg
¼tsp vanilla extract 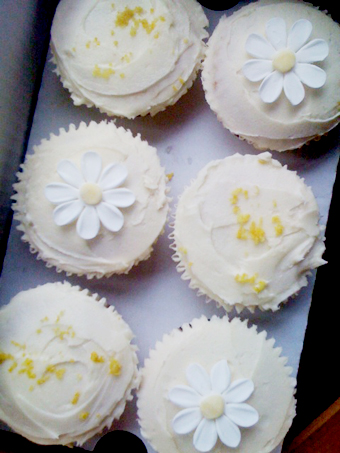 You will also need a muffin baking tray and muffin cases, Tesco and Sainsbury's have the best shaped cases, I find that Waitrose cases are slightly thinner so you can see the cake through the paper once it's cooked.

I normally start off with 100 grams of butter and 100 grams of icing sugar if I'm just using a palate knife to top the cakes; piping a topping will use a lot more buttercream.

Here I was making lemon and vanilla flavoured buttercream, so I combined the butter and icing sugar together first, divided the mixture in half before adding a couple of drops of vanilla extract to one and some finely grated lemon zest and a couple of dashes of lemon juice to the other.

Mix the flour, sugar, baking powder, salt and butter together, I use a Baymix (the best and most versatile kitchen invention) but you can do this by hand - the Hummingbird Bakery suggests a freestanding electric mixer with a paddle attachment - until you get a sandy consistency and everything is combined.

Gradually pour in half the milk and beat until the milk is just incorporated.

Whisk the egg, vanilla extract and remaining milk together in a separate bowl for a few seconds, then pour into the flour mixture and continue beating until just incorporated.

MIX ONLY UNTIL THE MIXTURE IS JUST SMOOTH, OR EVEN JUST BEFORE. Over-mixing does not a good cake texture make.

This recipe will be runny. Hummingbird suggest spooning the mixture into the cases, I have found the best way is to pour it in using a jug - definitely the less messy and more accurate option. Fill each case two-thirds full.

Bake in the preheated oven for 20–25 minutes, or until light golden and the sponge bounces back when touched. AVOID OPENING AND CLOSING THE OVEN DOOR. This will bash the air out of the cakes and the texture will not be right, especially with a mixture as light as this one.

Once the cupcakes are cooled, use a palate or table knife to spread the buttercream onto the cakes; cover the entire top of the cake generously first, then swipe lightly across the top in a circular motion to remove the excess, leaving you with an artfully imperfect surface of buttercream.

Sprinkle with lemon zest or top with a pre-made daisy whilst the icing is still malleable; the surface will dry out soon and nothing will stick to it.
Posted by Unknown at 8:57 PM